The OroValleyan — Geocache of the Week

Imagine a world far away from our own. The mission was simple: gather intel about the planet OV and transmitit back to Earth. But an unexpected dust storm hastily moved in and separated you from your crew. In order to save the entire crew they were ordered to leave the planet without you.

The storm has now passed. Your eyes open, and you dust yourself off. It’s unbearably hot and the heat from this solar system’s sun means almost certain death if you don’t find shelter. Contacting the ship to turn around for you is paramount to your survival, but upon getting to camp you realize that the communications system was damaged in the storm.

To get your SOS out there you’ll need to locate “OVAL,” the Oro Valley Astronautic Laboratory, a probe that lost all communication abilities in 1997. Once you find the probe you must raise its antenna to initiate the audio and visual tests. The success of these tests are vital to any potential communication. Pay close attention to the camera; it will point to a combination of 16 hexadecimal characters around its circumference. Compare the hex characters to an ASCII (“asky”) table provided on the cache page to translate the important message. 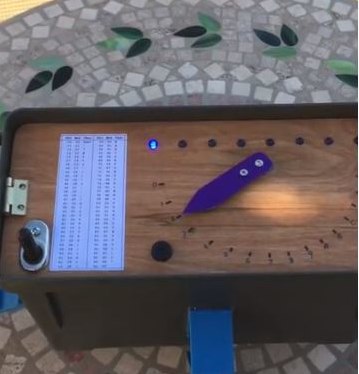 Completing this martian Multi is a rewarding one. Many of cache owner cliptwings’ caches are rewarding to find. We interviewed him on his cache creation process; look out later in the week for a full interview.