Since 2004 Sonny and Sandy have been geocaching together and travelling the world. What began as a first date became a hobby they would love and share together. A year and half later the PodCacher podcast was born. Their charming personalities, engaging content, and consistency make the show entertaining for geocachers of all ages and levels of experience.

The podcast has grown to be the largest and most internationally-recognized geocaching audio show in the world. Earning nominations for “Best Produced Podcast” by the Podcast Awards and has been a featured podcast in Apple iTunes for many years.

As part of celebrating PodCacher’s milestone of 600 episodes I interviewed Sonny and Sandy to learn more about how they got started and who they are outside of geocaching.

Where did you both grow up?

Sandy: I grew up in the Philippines where my parents were missionaries and then spent time in California and North Carolina. Later I lived in Florida until True Love brought me back to California!
Sonny: I grew up in San Diego. My dad was in the US Navy and during my high school years, he was stationed in the Philippines. I went to college and taught in Los Angeles for several years before moving back down here to San Diego.

What were hobbies and interests as kids?

Do you both have careers outside of the podcast?

Sandy: Currently I’m a stay-at-home Mom and I also homeschool Sean 3 days per week as part of a charter school he attends. Prior to marrying Sonny, I was an IT Director for a large non-profit organization.
Sonny: I’ve worked in education as a teacher and director of technology. I’ve been a university professor, a professional photographer, and currently work for an education company.

Sandy: When geocaching was first mentioned I had no idea what it was, but I thought it sounded interesting. My initial impression was that it was lots of fun and so was this guy! Our entire first date involved geocaching (I think we found 3 or 4) WITH my brother, his wife and their 3 kids. Our first date alone was dinner at The Old Spaghetti Factory the following night. 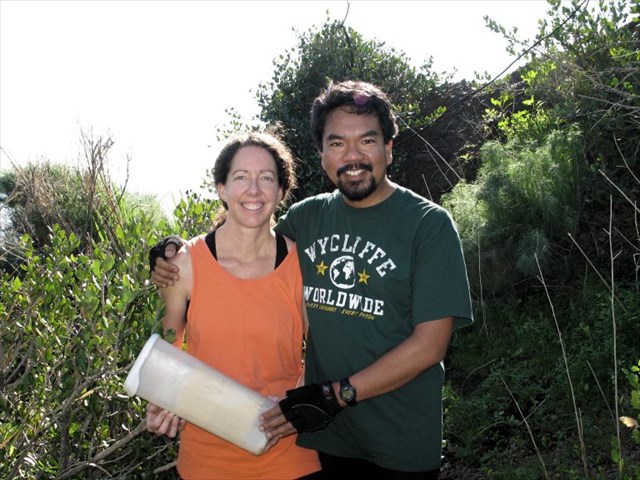 iTrax & Foxtail. Now that sounds like an adventure duo if I ever heard of one. Is there a story behind either of your prior usernames?

Sonny: My name came from a combination of sources: the Garmin eTrex, the iPod and a Tracks walking stick (that I still use).
Sandy: After we got married and it became possible to change your geocaching name, we talked about what it should be. Sonny wanted to stay iTrax, so we needed something that sounded fun and went along with iTrax. Sonny suggested Foxtail after we went hiking and geocaching and I had them all over my socks.

So, podcasting? What motivated you to begin recording? What were some other subjects you considered podcasting about? 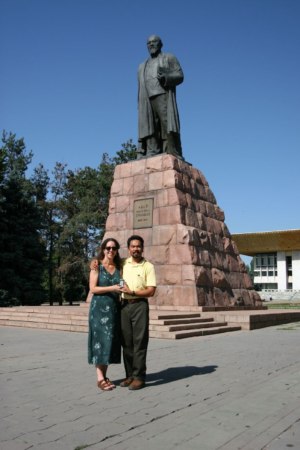 Sonny: I found out about the technology that allowed people to share recordings that they had made with the world. First started listening to podcasts then realized I could create one as well. We did some recording on a summer trip to Kazakhstan to test out some gear, and started the podcast as soon as we returned. The Abai Statue Cache virtual was our first international geocache!

Sandy: Yep, Sonny is the tech geek around here and definitely an early-adopter! We didn’t really consider any other subjects. When Sonny wanted to try podcasting, I suggested geocaching and it seemed the perfect fit.

You two seem like naturals on your show. With reaching 600 episodes, do you find it difficult to find content for your show?

Sonny: It’s not as hard to find good content as 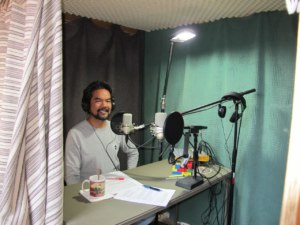 it used to be. As geocaching grows in popularity, it has become easier. Sometimes we have too much good content for one show (it would be a hugely long episode) and we have to decide what gets left on the cutting room floor or saved for the next week.
Sandy: It’s so true that in the early days we didn’t think we’d have enough geocaching content to fill 60 shows, let alone 600. But it’s amazing how many things there are to discuss! Plus we have a worldwide audience who send in questions, ideas, stories, news items and more!

You both bring a lot of positive energy to the podcast. How often do you find yourselves laughing with/at one another and have to cut the recording. Can you recall any particularly funny moments on your show? If so what happened?

Sandy: Well, the beauty of how we record is that we don’t do it live. We just record in one long file and then Sonny expertly edits the show later, so if there are mistakes, flubs or too much laughter, it can easily be edited out. Sometimes we add bloopers at the end of the show since people seem to enjoy that. Usually the most laughter happens when Sonny slips in a pun or joke that he didn’t tell me about ahead of time, and the laughter is totally spontaneous. I can remember a couple of times when I got the giggles and just couldn’t seem to stop. Sonny kept teasing me about it, which obviously just made the laughter continue. We generally have a lot of fun together recording the show.
Sonny: On a typical week, Sandy preps the show and then I go over it before we begin the recording. At that time, I can make connections, cultural references and of course points of humor. Yes, Sandy and I generally have a good time recording the show and she’s not always aware or expecting my responses or comments.

In July 2005, did you have any idea what direction your podcast would lead, to? How many variations of studios/set-ups have you had?

Sonny: Oh no. We did it for fun, because we loved geocaching and wanted to see if we could connect with people. We’ve had numerous studio setups. We started on our living room couch with a small iRiver MP3 recorder and mic that we passed between us. I kept creating and redesigning “studios” that would allow us a quick startup and recording AND most importantly a consistently quality audio. Over time, we bought better gear and I built an actual, “sound conditioned” studio in our home office. We still use that today and actually have an “On Air” sign that lights up when we power on the studio.
Sandy: Back in 2005 we never dreamed we’d still be doing this 12 years later. We also didn’t anticipate how many other geocaching podcasts, vloggers and bloggers would appear over the years.

What are the top 5 Caches you’ve found?

GC30 – MINGO – found with a group and a flash mob event as well!
GC1169 – Mission 9: Tunnel of Light – before it went missing – because of the rare APE icon
All of WVtim’s gadget caches in West Virginia – too hard to narrow down
GCF7A2 – Escape from Alcatraz – and other virtuals that add an extra dimension to an already amazing experience                 GC25 – Camels Prairie Stash – oldest in Idaho, escorted by the owner, Moun10bike himself

How does your world famous son Sean deal with all of the paparazzi? Can I get an autograph? 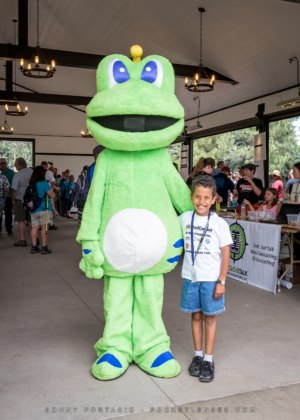 Sonny: Sean is an easy going kid. We took him geocaching with us while he was an infant. It didn’t slow us down! So he’s grown up with geocaching. He knows that he’s got lots of geocaching aunts and uncles all around the world! 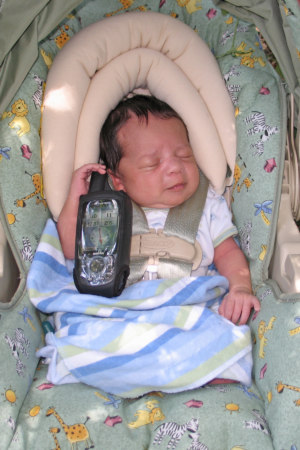 Sandy: Sean has grown up in the PodCacher / Geocaching Family and he is pretty good at taking it all in stride. He’s a friendly, social kid and has no trouble making new friends wherever we go. He is also good with adults, partly from being an only child. He doesn’t find it weird at all that these complete strangers will come up to him and say, “Hi Sean!”. And yes, he’s happy to offer autographs.

What is your favorite caching moment with one another?

Sonny: The Going Caching event in Georgia was so amazing. We had such a fun time with each other, as well as all our geocaching friends.
Sandy: We’ve had so many of them – typically in awesome locations we have travelled to together. One that I can think of was in Norway 3 years ago. We had driven with our host kassimaja up to the top of Tron mountain for a geocache. On the way back down, we pulled off the road to grab another one. Kassimaja stayed in the car and let the 3 of us go find it. We located the cache and sat down on the rocky hillside and had 6-year old Sean take our picture. As I looked around me, I thought about how geocaching (and our podcast) had brought me to this beautiful country that I probably would have never otherwise visited. It was a pretty amazing moment to share together. 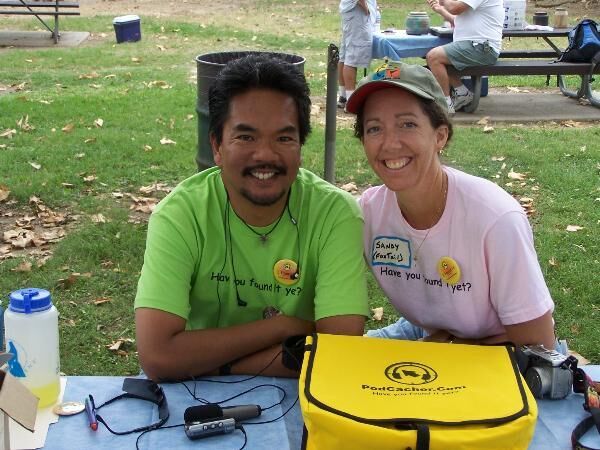 Congratulations on 12 years and 600 episodes Podcacher! 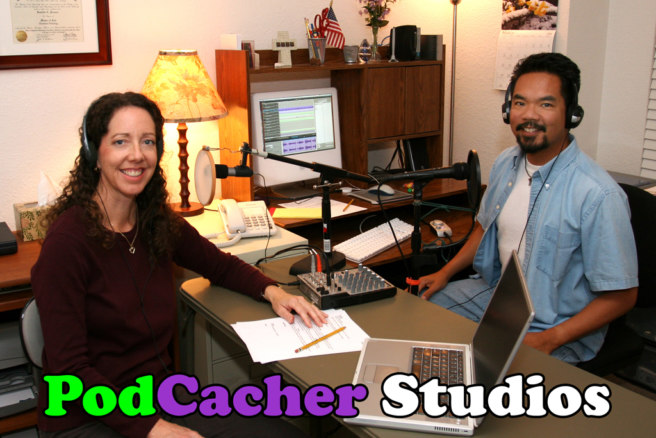