“I need to find a geocache!”

“Please go down to the Sedona police station for immediate assistance.” 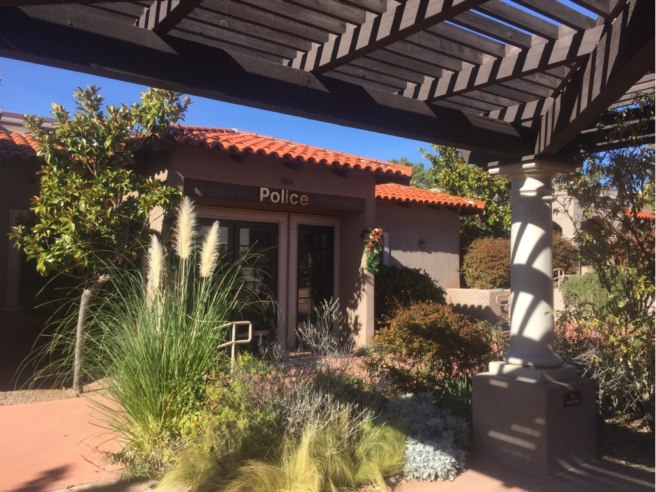 You don’t need to be a fugitive to find this cache, but it may make you momentarily feel like one. In 2013, in an effort to support responsible geocaching and become a part of the geocaching community, the Sedona Police Department published its first geocache. Since then, it has accrued almost 1,000 finds and 427 Favorite points, making it Sedona’s most-favorited and most-secure geocache. 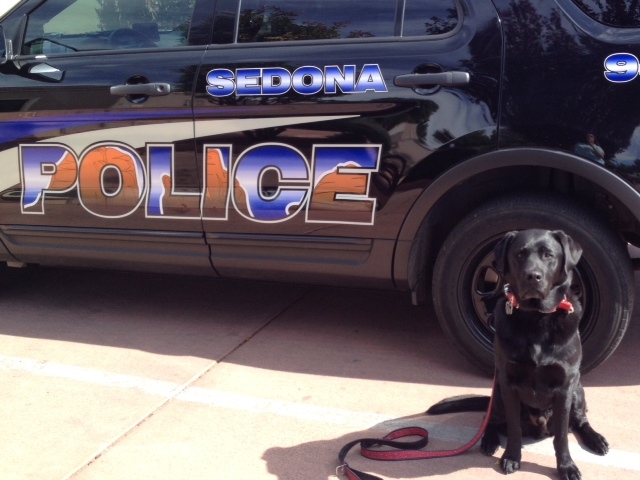 Annually, the Sedona Police Department welcomes nearly four million visitors and many of them are geocachers. Open 24 hours a day, GC45297 can be logged at any time and you don’t need to be sneaky (in fact, you couldn’t be if you tried). 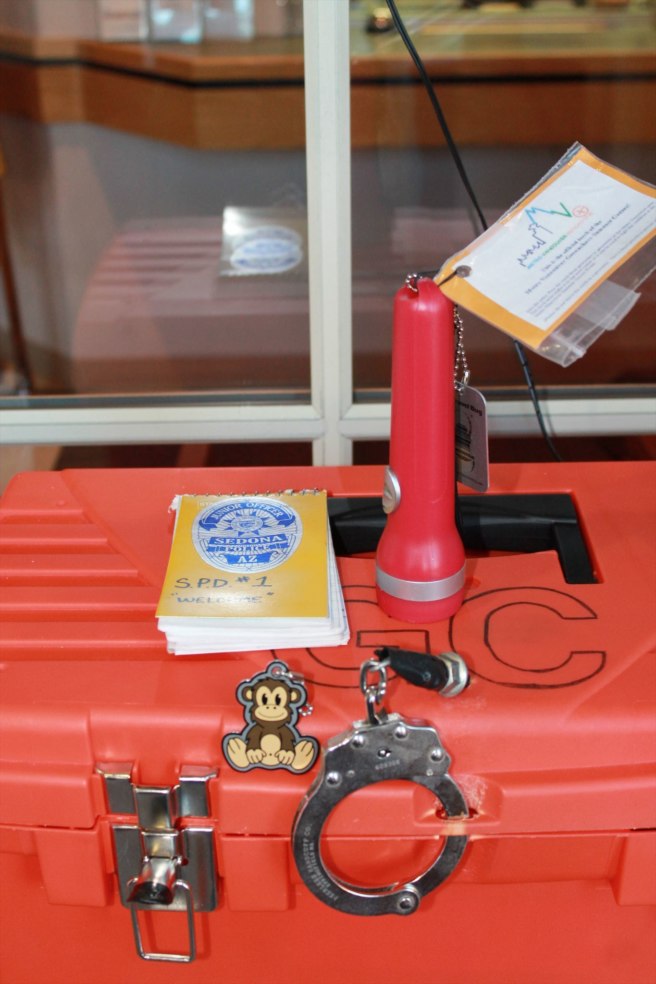 The cache is a bright orange toolbox protected by handcuffs. You will need to look around to locate where the key to the handcuffs are in order to get inside the box and set your smiley free.

Opening the box queues the dramatic COPS theme song and police lights flash red and blue, but don’t be “alarmed” — this is supposed to happen. Inside the toolbox you’ll see the tupperware geocache container, a number of swag items, and trackables that the police station will regularly take inventory of. The cache page also reminds geocachers of an important rule of the game:  no food is allowed in the cache, so donuts can be left at the front desk where the can be safely “disposed” of. 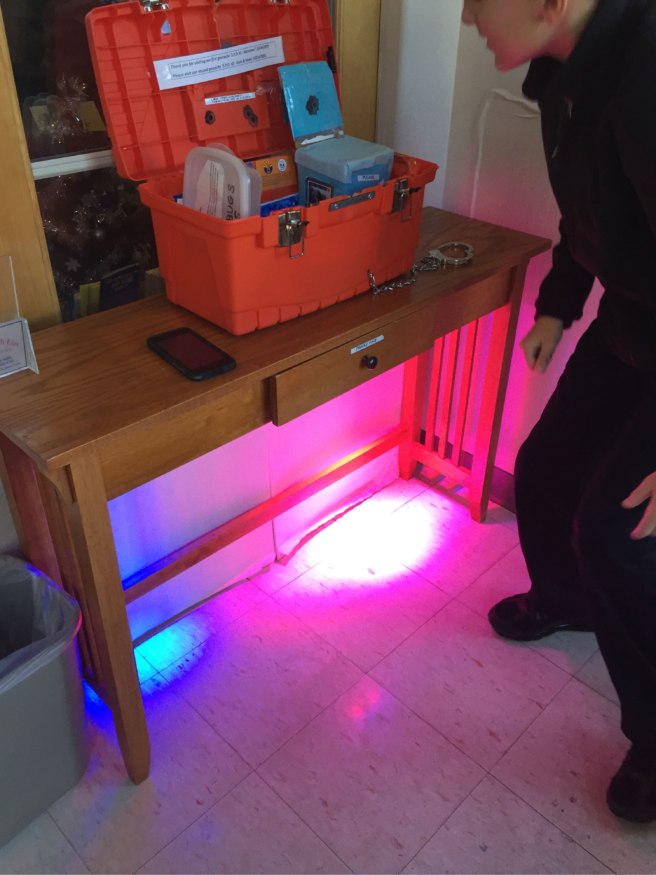 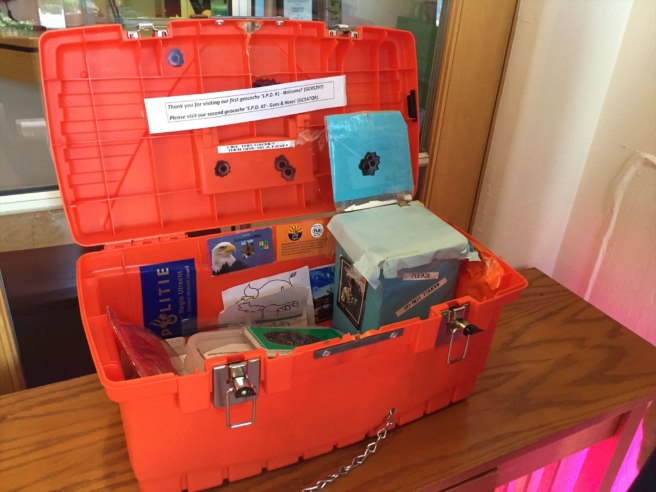 Step into the building and there it is. What you do next is up to you. Just remember where you are so don’t get too rowdy if you have problems. It is a nice change of pace when the local police put in a cache and not ask you what you are doing in this parking lot or wherever they find you hunting for a CC. TFTC Jean & Bob 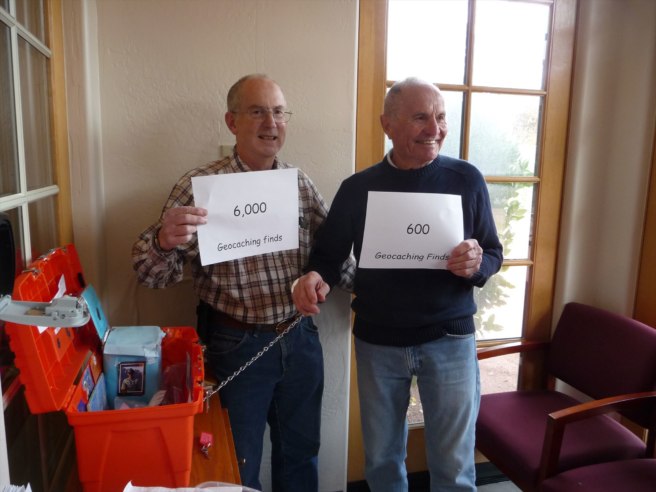 I was coming up on 6,000 finds and wanted to do a really neat one for this milestone. I searched for a cache that had a lot of favorites and found this one. My wife and I along with 6 of my closest friends drove 2 1/2 hours from Gold Canyon to Sedona just to get this one. We stopped along the way so our friend Patsanboo could get up to 599 fined. Then we went to the police station. What a great group of people there! They were so nice to us and had fun with our inability to read the profile page.

We got the cache open and posed for pictures. This one truly deserved a favorite and if I could give it two I would do so. This is an original hide and, for some strange reason, the cache doesn’t get muggled in this location.