BARTOLOME (GALAPAGOS) — Geocache of the Week

The Galapagos Islands have an expansive population of species and surprisingly enough most of them are native to the islands—this is known as Endemism.  About 80% of the land birds you will see, 97% of the reptiles and land mammals, and more than 30% of the plants are endemic. (Statistic from galapagos.com) 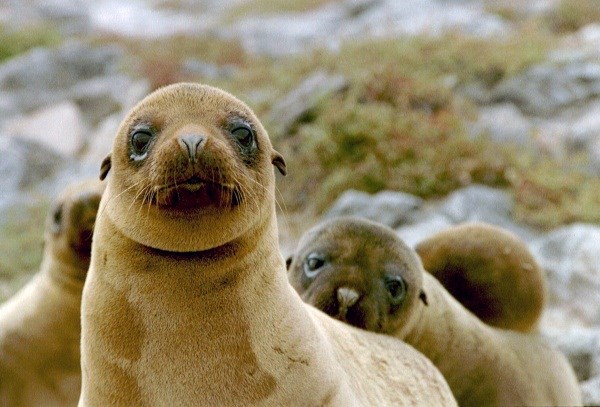 Seldom in nature can you be approached a wild animal but GC1KGT8 brings you to a unique part of the world. The wild life on the islands have virtually no fear of humans and are easily observed in close proximity, but the Galapagos have more to offer than just colorful wild-life. Bartolome is a geologist’s playground—hence the EarthCache listing. 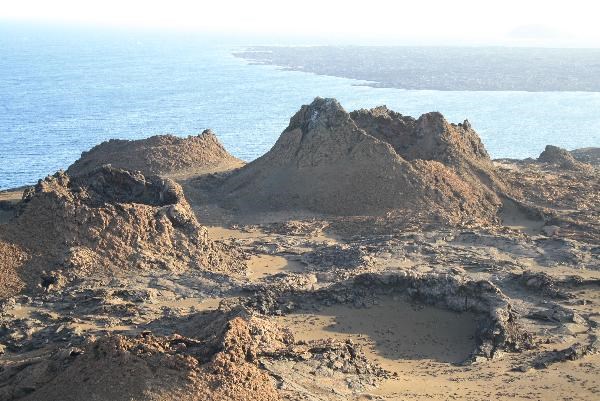 The little island, Bartolome, is only 1,2 square kilometers (297 acres). Rocky pillars of basalt called “tuff cones” jut out from the surface of the island are remnants of hardened fallout of a volcanic eruption. One of the great rewards of GC1KGT8 is the charming postcard view of the prominent Pinnacle Rock, the largest tuff cone on the island. 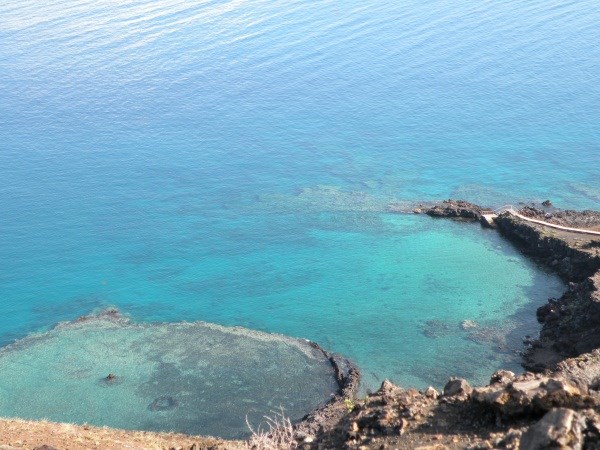 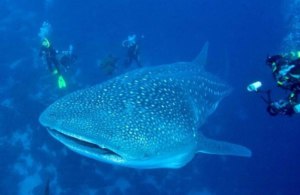 Submerged just offshore is a volcanic crater on the way to the lunar-esque beaches on the north end of the island. According to the cache page the northern beach is open for swimming and if you brought your snorkeler you are in for a treat! The beaches of Bartolome Island are filled with fluorescent fish, playful sea lions, and even whale sharks! 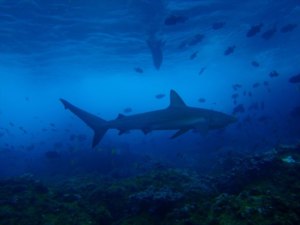 The trail leads you across a sandy isthmus to the beach at the southern end. Swimming here is not welcome, and not as friendly. White tip sharks have been known to enter the waters and the cache owner Boiler warns of hostile ghost crabs in that area. 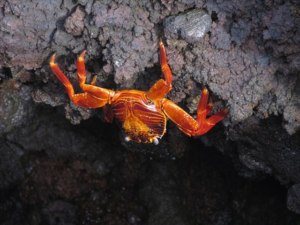 You can enter Bartolome on the North end of the island. The trail begins on a rock path that will lead you through volcanic sand. A long wooden stairway (~360 steps) will bring you through the lunar landscape with almost no visible pioneer vegetation up to the summit hill to the viewpoint of Pinnacle Rock. 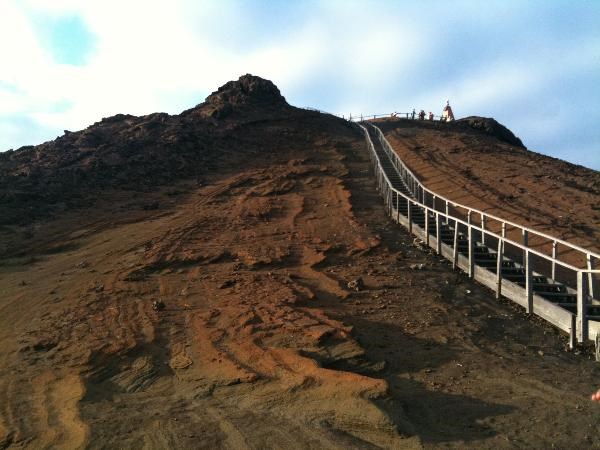 If you are EarthCaching on Bartolome Island here are some notable vocabulary terms to take with you:

1.) Lava tubes: Formed by flowing rivers of lava whose outer layer cools and solidifies quicker than the core (creating a skin). The liquid lava continues to flow through the middle, hollowing out an area creating a tube like structure. 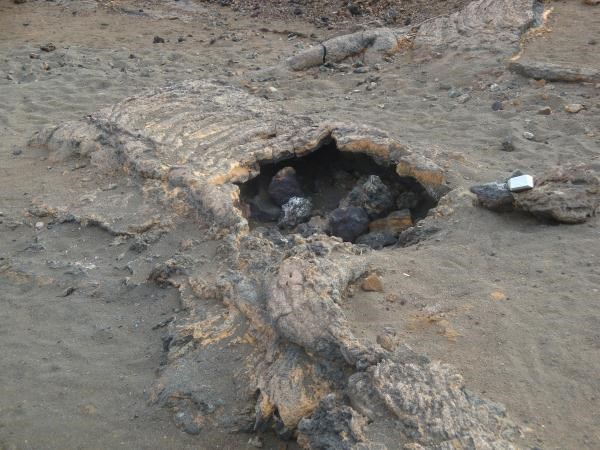 2.) Spatter cones: These cones are either a deep red, gleaming black or intense green. The cones are formed when the pressure of gases below the magma in an active lava flow push upward. The gases escape carrying big pieces of lava into the air. The outside of the lava cools down and turns black, and when it hits the ground, the lava ball bursts open releasing the hot magma inside. 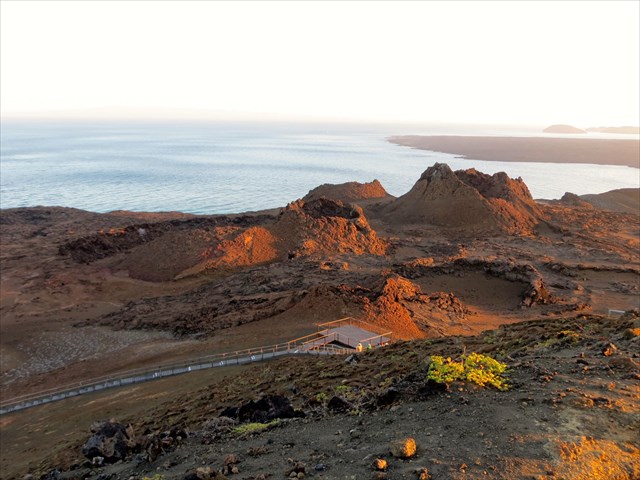 3.) Lava bombs: The outcome of a spatter cone. The outside surface of lava bombs are smooth, but the inside of the lava bomb bursts open with broken fragments, creating A’a lava. The broken lava is very runny. However, once the gases all escape, the lava will start to slow, creating pahoehoe lava.

Here’s what our fellow cachers had to say about their experience:

One of the most beautiful landscapes in the Galapagos so far! What an awesome trip Elm77 and I are having. The climb was a breeze for me and the view spectacular. Our guide knew a lot about the geology of the area so I learned a lot! Answers and picture will be sent as soon as I get home. Thanks for the lesson! –Pomwoof 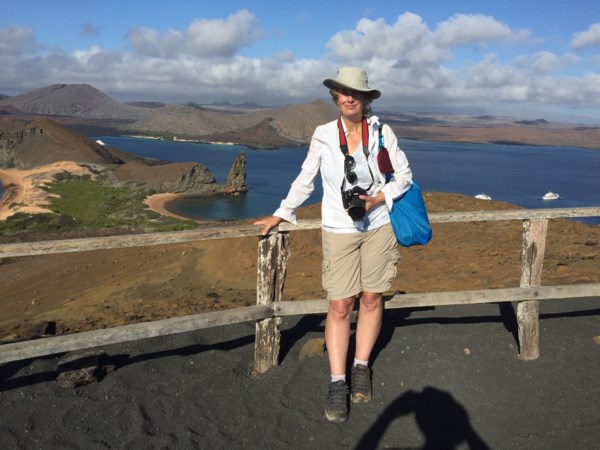 Last year on my 40th birthday I made myself the present of a Galapagos dive trip.  And by doing so a dream came true. As a group of 16 divers from Switzerland we were able to charter the “Galapagos Aggressor” for our trip.

On the second day of diving after two dives at Punta Carrion we set foot on Bartolomé Island for a land tour.  Of course I had already hoped at home that I would get the opportunity to visit one of the few caches around the Galapagos Archipelago.

I enjoyed the hiking a lot, admired the view from the top and even had the chance to see sea lions, penguins, Darwin’s finches, a lizard and a blue-footed booby – part of the animals on land, part while riding the zodiac. –Haiopaia 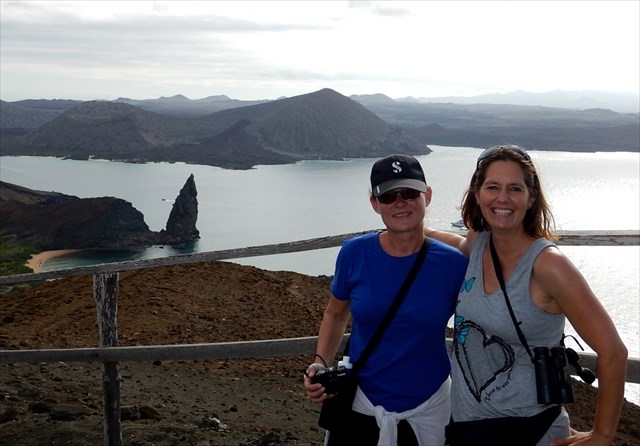 Thank you boiler for cooking up this hot EarthCache. Is that name a coincidence? I think not. Check out the beautiful photography of Bartolome Island and it’s wild life in the gallery below!

« “You have to be odd to be number one” — First of each geocache type » Where in the world is Signal? (Hint: Grüße aus Deutschland!)