Kittiwake — Geocache of the Week

The cache can be found 40 feet below the water’s surface in the Cayman Islands. For most people that means getting SCUBA-certified and doing a dive (though, as the cache owner points out, some people choose to free-dive). As is common in geocaching, the logbook isn’t the only prize to be found at the cache site. Between the cache and the seabed, slowly becoming an artificial reef, is the cache’s namesake: the USS Kittiwake, Chanticleer Class Submarine Rescue Ship. Learn more about the Kittiwake on the geocache page. 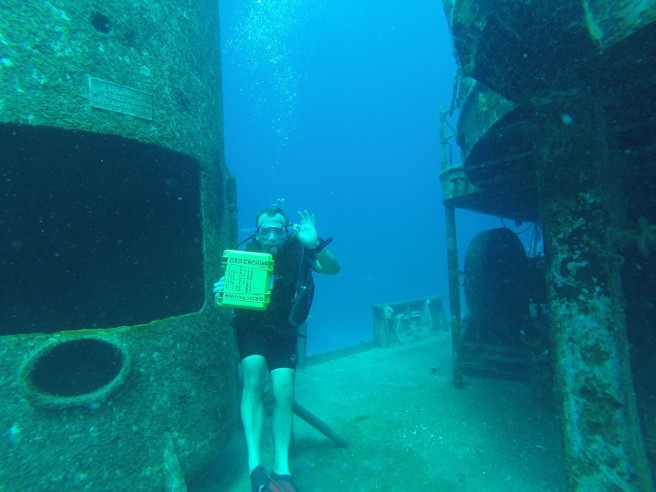 The CO is Hindl.com, who’s been a technical SCUBA instructor for a decade, regularly leads tourists on dives to the Kittiwake, and thought geocaching would make an extra special addition to an already exciting exploration for many people. But he’s been careful about his choice of underwater cache locations: “I would not allow myself to put any geocaches on the historical sites or pristine reefs, but I felt like it was ok at the artificial (man made) wrecks.” Which the Kittiwake is.

Are you a regular diver?
I am a technical instructor teaching from Trimix to CCRs (closed circuit rebreathers) and my favorites are wrecks and caves. I have done many dives on this wreck, which is an amazing deco stop (series of mandatory decompression stops before being able to ascend any shallower) after a deep technical dive on the wall. My first dive here was in the summer of 2012.

How often do you have to maintain the cache? What does that normally entail?
Given the limited time most visitors have at this GC, there is not much maintenance needed. However the ocean seems to be eating pens, they need to be replaced more often than in other land based caches. It usually takes just a quick stop on a regular dive. It can be done free-diving too, but not everyone can free-dive that deep, for that long.

What has been your response to all of the great comments on your cache?
I can not describe how happy it makes me that people like this cache and mark it as their favorite. Not only because of the geocache, but I also see behind each of these geocachers, comments or logs a diver, snorkeler, free-diver but mainly an sea/ocean lover and someone who wants to protect the creatures we still have left in the seas.

What was your most memorable dive at this site?
I was lucky enough to guide Col. Buzz Aldrin (Apollo 11) on few dives during my diving career and the best one was through the Kittiwake wreck. He spent most of the dive “walking” upside down through the wreck, later claiming it is the closest he can get to walking on the moon again.

Do you have anything you’d like to share with the geocaching community in general?
Thank you to all who keep this great project going. Keep it up