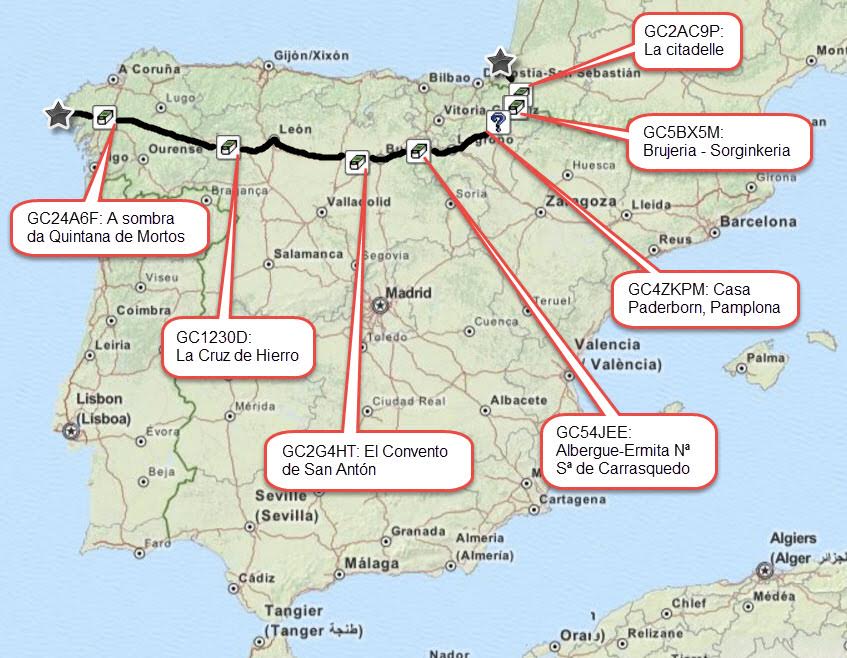 Have you ever wanted to go on a pilgrimage?

Just as summer turned into autumn, I was fortunate enough to walk across Spain. Literally. Those 1,043 km took me over 3 mountains, flat through 7 days of the exquisite meseta (plateau), and across more than a thousand years of Spanish Catholic history. Those kilometers also brought me conveniently near several remarkable geocaches. And bonus: two new country souvenirs! This pilgrimage is called El Camino de Santiago.

I began my 38-day walk in the misty French town of Saint-Jean-Pied-de-Port, nestled in the foothills of the Pyrenees. Although I had gotten a late start that morning, I still walked against the pilgrim traffic towards the cache at La citadelle to earn my France souvenir: magnifique! Later that day, I walked from France into Spain, over the Pyrenees. 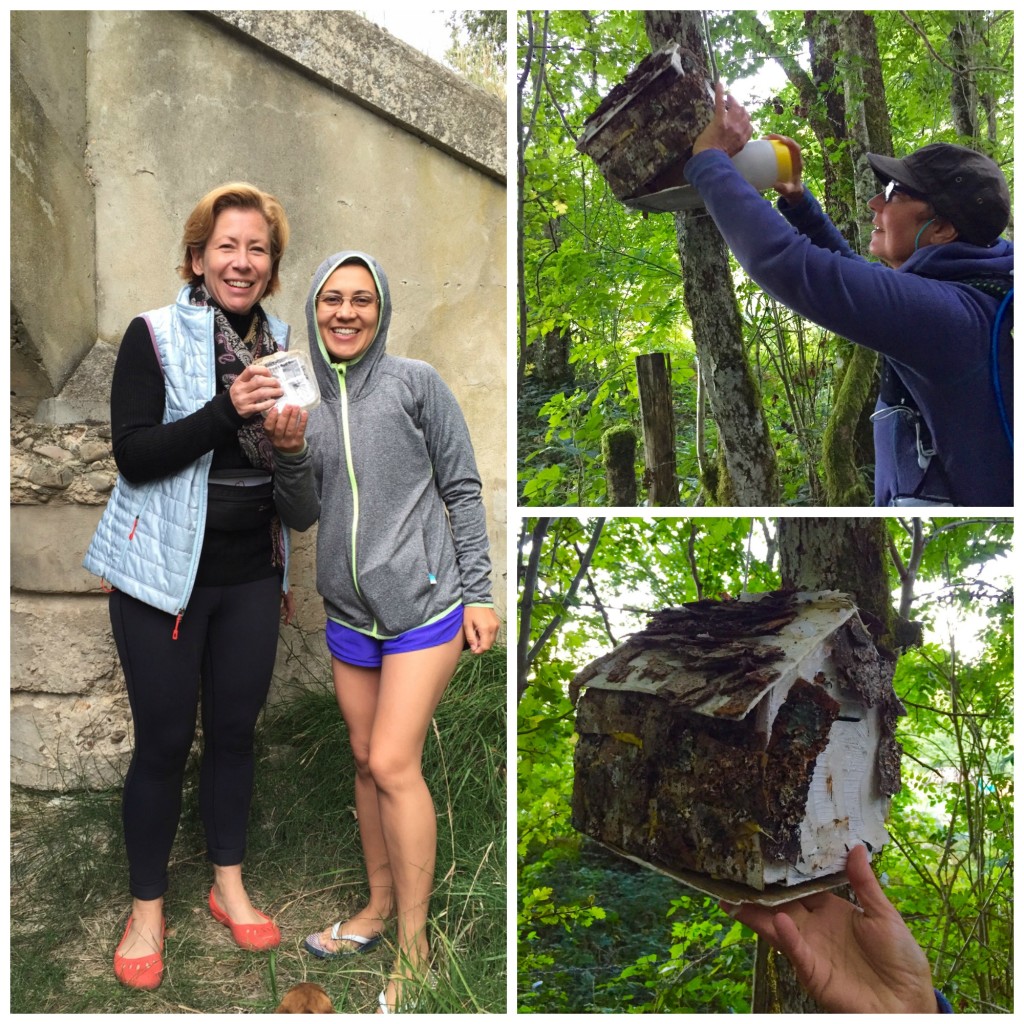 Clockwise from left: Karin and Milene find a cache together. Amber finds her 1st geocache.

On the second day, my new friend Amber asked me what this game is all about. The best way to explain geocaching is to show it, of course! At first, we DNF’d at Caminante No Hay Camino… which is ironic given what that cache title means. We found success at Brujeria – Sorginkeria – maravilloso! – and only because this Dutch woman also speaks Spanish and helped me understand that the hint (pío, pío) is about birds: something not immediately obvious to a non-native Spanish speaker like me. Amber’s first find had a very creative container, and we secured that additional country souvenir.

Walking farther west, we stumbled upon a German-style T5 experience at Casa Paderborn, Pamplona: märchenhaft! I estimated the cache height to be some 21 feet or so off the ground, well beyond the 14-foot ladder I borrowed (a ’14-foot ladder’ is probably called something different in a place where they don’t measure things in feet.) My pilgrim friends and 10 cyclists who happened to be resting below the tree did not understand what was happening. Even I was pretty amazed that WAY UP THERE is where my day went, in a dress, no less. They asked me from the ground: ¿Qué encontraste en el contenidor? What did I find in that container? Adventure and a great story to tell, that’s what.

The Casa Paderborn, Pamplona cache brought me additional joy because I had helped to develop the Paderborner Land GeoTour in Germany. This pilgrim hostel and this geocache both represent a sisterhood between the city where I was and a city that hosts a GeoTour! My worlds were coming together in delightful, mathematically unlikely ways. 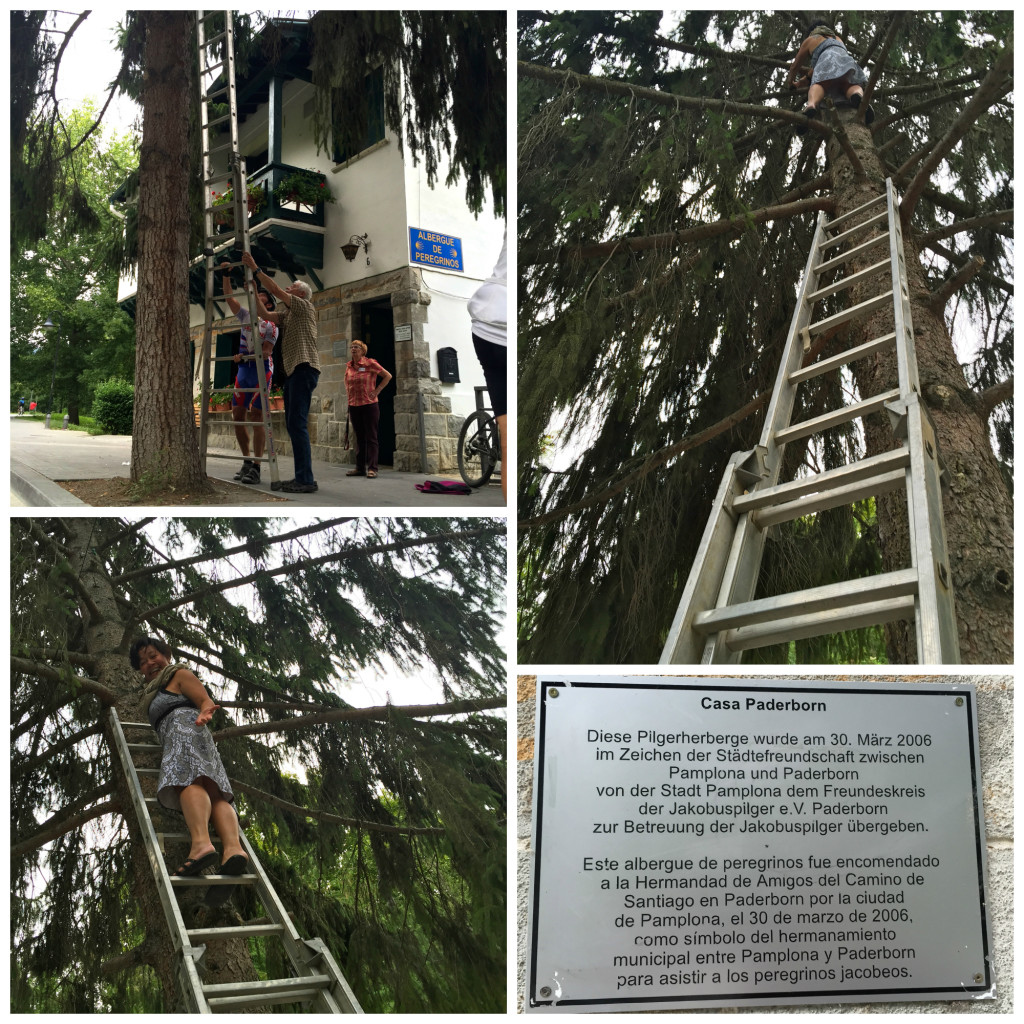 By the time I got to La Cruz de Hierro, I was in my 4th week of walking. One of the most significant and powerful moments along the pilgrimage route, I had every intention of finding this geocache as a personal milestone. As it turned out, the significance and power of the moment itself caused me to forget about all about geocaching; instead my thoughts went to so many other far-off places. I recorded that as a memorable DNF since I had intended to find it and once within a few meters of the cache, I simply forgot to look. Has that ever happened to you?

Right outside the cathedral at Santiago de Compostela is a shadowy geocache called A sombra da Quintana de Mortos. Finding it at night when the lights are on makes for the best experience: architectural factors at the location combine, creating the magical illusion of a pilgrim forever tethered to the cathedral walls. It’s quite an improbable combination: the bumps on the cathedral walls were built independently of the simple pillar that creates the shadow. Further, the electric lights were added hundreds of years later. This is not something included in a typical guidebook. This is something I found only because of geocaching. 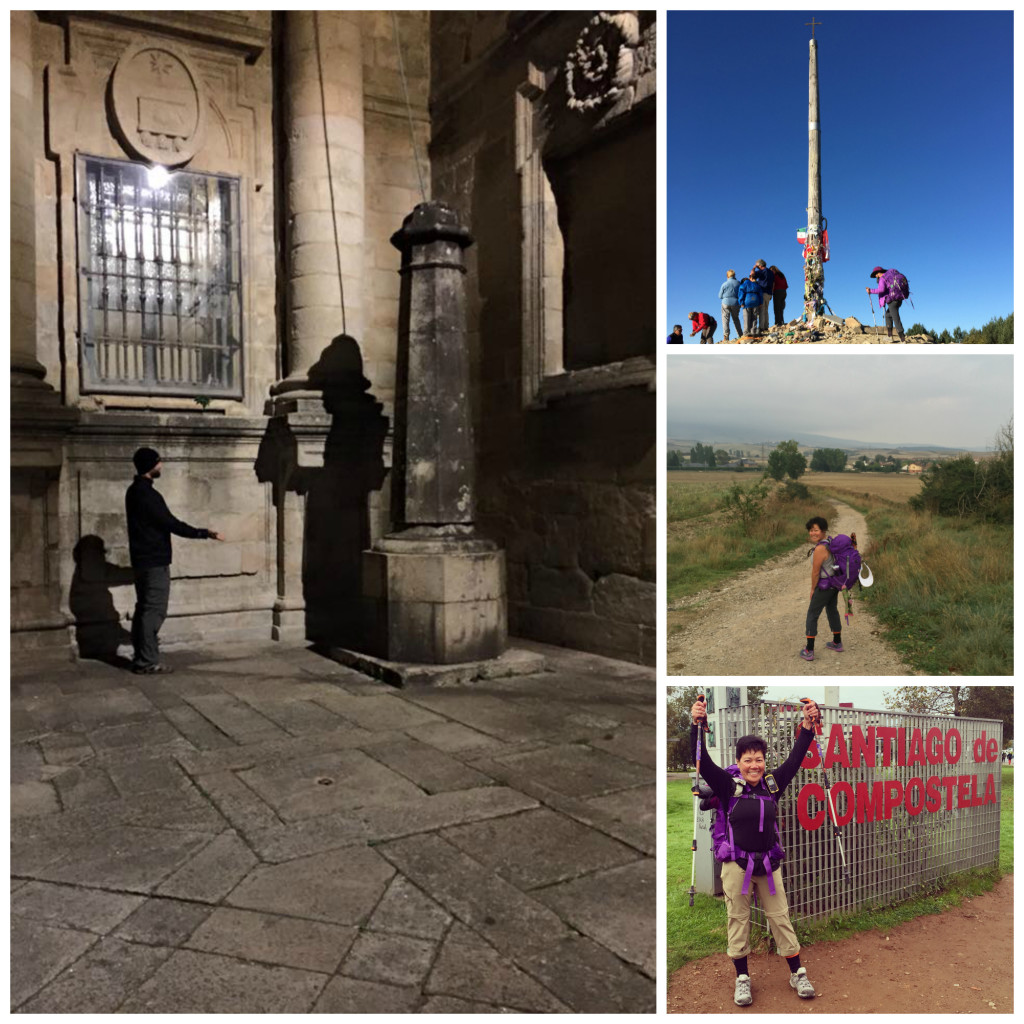 Clockwise from left: Sombra with Hans photo by Suzanne, MissJenn walking to the Cruz de Ferro, Walking the Camino, At the finish.

Signing each of those geocache logs reminded me how geocachers have more than just geocaching in common. My stories intertwined with other pilgrims’ narratives as they each made their way one step at a time towards the city of Santiago de Compostela just like I did, but differently than I did. For example, the logs show that Dauby had started in Prague while I started walking just over Spain’s border with France. I read that the Canadian 3 Bearss were pawing through caches, always just a few days ahead of me. I actually met Maltese superprizz in person in Burgos (at a cache owned by my friend and Community Volunteer Stitch81) and we must have had very different paces since we didn’t run into one another again. Stitch81 himself had walked his own Camino many years ago, and he gave me sound advice and helped me with critical provisions.

It will take me ages to process all my many stories about this awe-inspiring, multi-faceted experience called El Camino de Santiago. At least I have now told you about some of the caches that helped make it an even better adventure.

What is the longest distance you have walked while geocaching?