The Scoop on Trackable Tattoos 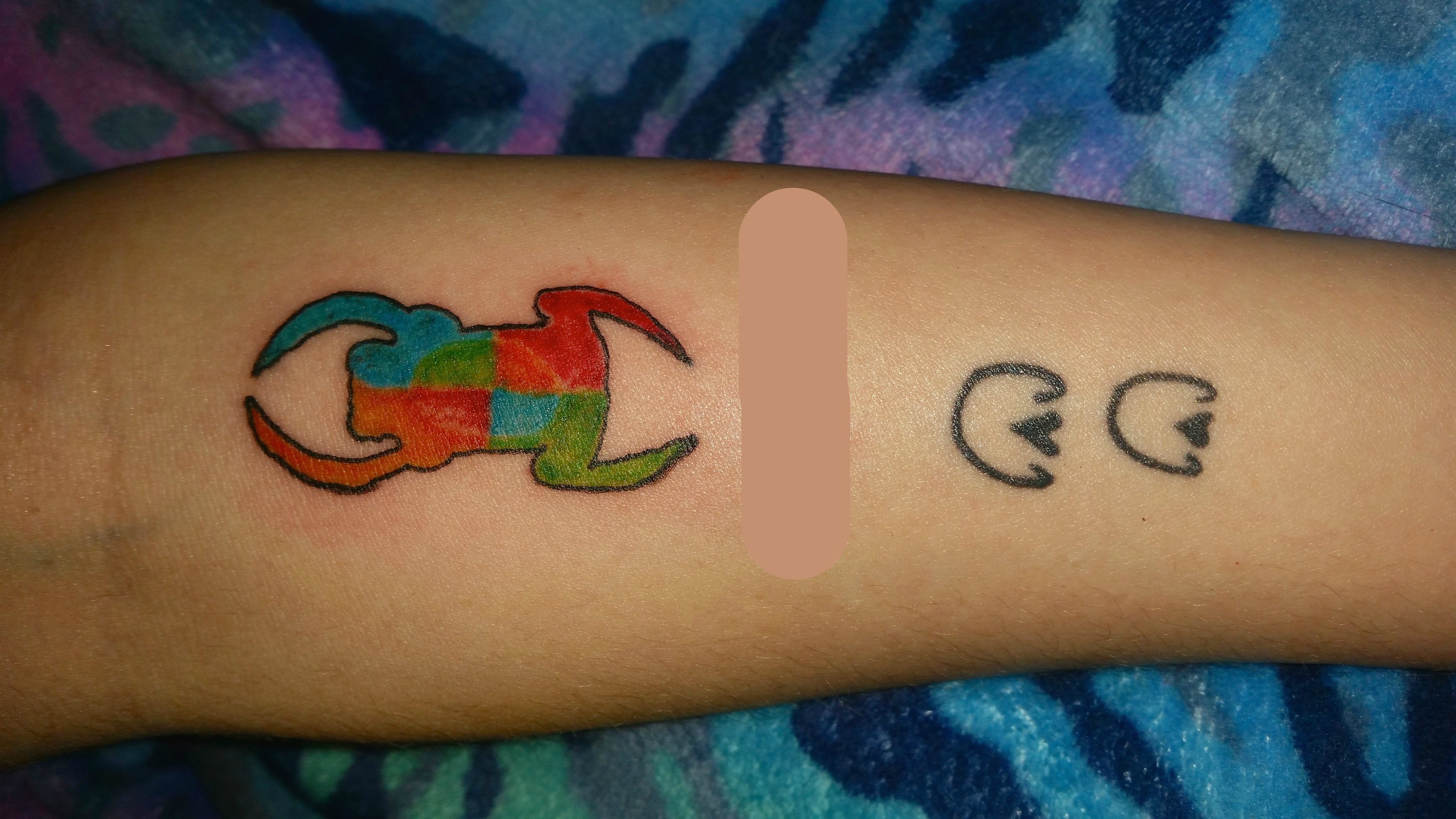 Geocacher aunna adds a little color to her design

Geocachers love to make anything and everything trackable. We’ve seen trackable pets, cars, stuffed animals, and even a drum set. Over 500 geocachers have taken their love of trackables to a whole other, more permanent level – trackable tattoos.

There are many reasons as to why geocachers decide to brand themselves. Maybe it’s because they want every geocacher they encounter to have a way to remember them, or maybe it’s an artistic way for a geocacher to express their love for the game. Either way, getting a trackable tattoo is a pretty reliable way to ensure your TB won’t go missing.

We asked Geocacher NutmegBrownie to share her recent experience with us, and we were amazed by the amount of thought and creation that goes into the process. Here is what she had to say:

What inspired you to tattoo a trackable on your body?

“I’ve always been interested and pretty much fascinated with tattoos, the history they have played and the stories behind the ones people choose. I’ve known that I was going to have one for a very long time and that it would be nature related somehow… On the other hand, timing and funding were another story. While researching tattoo artists that do that kind of realistic natural work and trying to find one somewhere near me, I stumbled on the site for the first human trackable and was immediately hooked – I thought it was absolutely awesome and just knew my first tattoo would have to be a trackable! I have a blast geocaching and have met some truly amazing individuals through it that I otherwise would likely never have known. It just makes perfect sense for something that I enjoy participating in so much and look forward to doing long into the future. Sometimes I forget it’s there and then I’ll catch a glimpse of it and it just makes me smile every single time!”

Can you tell us more about the design?

“Narrowing down the things that I really liked and wanted for my first tattoo was tough and took a long time… We’re talking years. My job as a Naturalist and various volunteer work as an Assistant Wildlife Biologist in an NPS entomology lab as well as various insect surveys helped narrow down my choice… Well, kinda. My first choices were more physically interesting specimens, but the space they required to get the detail I wanted  made me go back to the drawing board. I knew that my insect interest was perfect for a TB and that I also wanted to mix scientific accuracy with some Steam Punk elements. This particular insect doesn’t have any research, photos, or drawings, of it’s wings so that allowed me to take a bit more artistic license with my idea. The idea of mechanically driven insects isn’t anything new and there are some artists out there with amazing miniature works of art where they have taken a real preserved insect and added clockwork innards. So I just took mine a step further and gave the wings a bit of a mechanical feel too. I was also really lucky to have a super laid back and talented artist that didn’t mind my insistence on an 18th century scientific font or adding some additional small details as we went along. I had spent some time in their shop prior and a few e-mails regarding design elements I wanted so we were really comfortable at tattoo time. He was really great and did amazing work!” 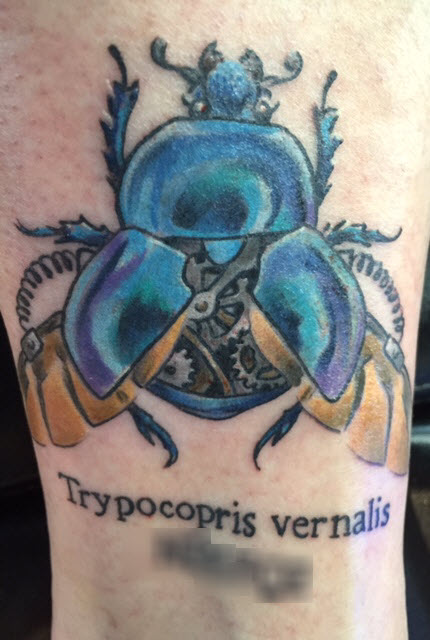 How did you decide placement?

“You always hear and or read that placement of a tattoo is a personal choice… It is, but other variables come into play as well. I originally envisioned my first tattoo being on the inside of my right wrist and just a little bit up the inside of my forearm. Partly because it is an area that is almost guaranteed to age well (i.e. no noticeable weight gain and little loose skin down the road in the later years) and also because I was getting the tattoo for me to enjoy and I wanted to be able to see it easily every day. Well, a small wrist doesn’t leave much room for anything but a pretty small tattoo and hard to notice details… So when the tattoo artist asked me if there was anywhere else I would consider – I immediately said the inside of my shin just above the ankle. He was good with that and there my insect sits. Now I have my wrist free for a second tattoo. Hmmm… decision, decision, decisions!”

What advice would you give to other geocachers who are interested in getting a trackable tattoo?

“Absolutely don’t be in a hurry, not even a little – take your time deciding on your design, research tattoo artists (near and far) then check them out while they work, be flexible and have a back up design and location (or two) on your body just in case. Do be prepared to sit still for quite a while to get it done and, I have been told that it hurts, sometimes a lot. I seem to be a bit of an anomaly because the 2.5 hours that I sat there watching wasn’t long enough! I actually enjoyed the tattoo process and was a bit disappointed when the tattooing was done… That isn’t the way it is supposed to be so just make sure you are mentally ready for the process and the pain. Choose the design carefully and make sure it’s something that you don’t think you’re going to get tired of seeing, explaining, or sharing… because none of that is going to go away.”

“A nearby cacher in the next state over from me was the first actual physical human trackable that I found, and I was literally so excited when I met him and his tattoo last spring. I was kind of dancing and hopping in place and making some embarrassing girlie squeaks (so not me). He just gave me some great advice at our Fall Event yesterday. He said be ready for the cachers that will forget to cover up your trackable number before posting pictures. It will happen at some point and once it’s out, well it’s out, so think about how you want to handle that ahead of time when the virtual logs start rolling in. I hadn’t thought about that because of course all cachers play by “the rules” and follow “TB etiquette”… LOL Rules?!? Etiquette?!? Absolutely appreciated the warning and shock prevention he provided. Oh, and like a trackable, tattoos aren’t for everybody so don’t be disappointed or surprised at those who show little or no interest; it just isn’t their thing. If you got your tattoo for you, it won’t matter one way or the other! :>)” 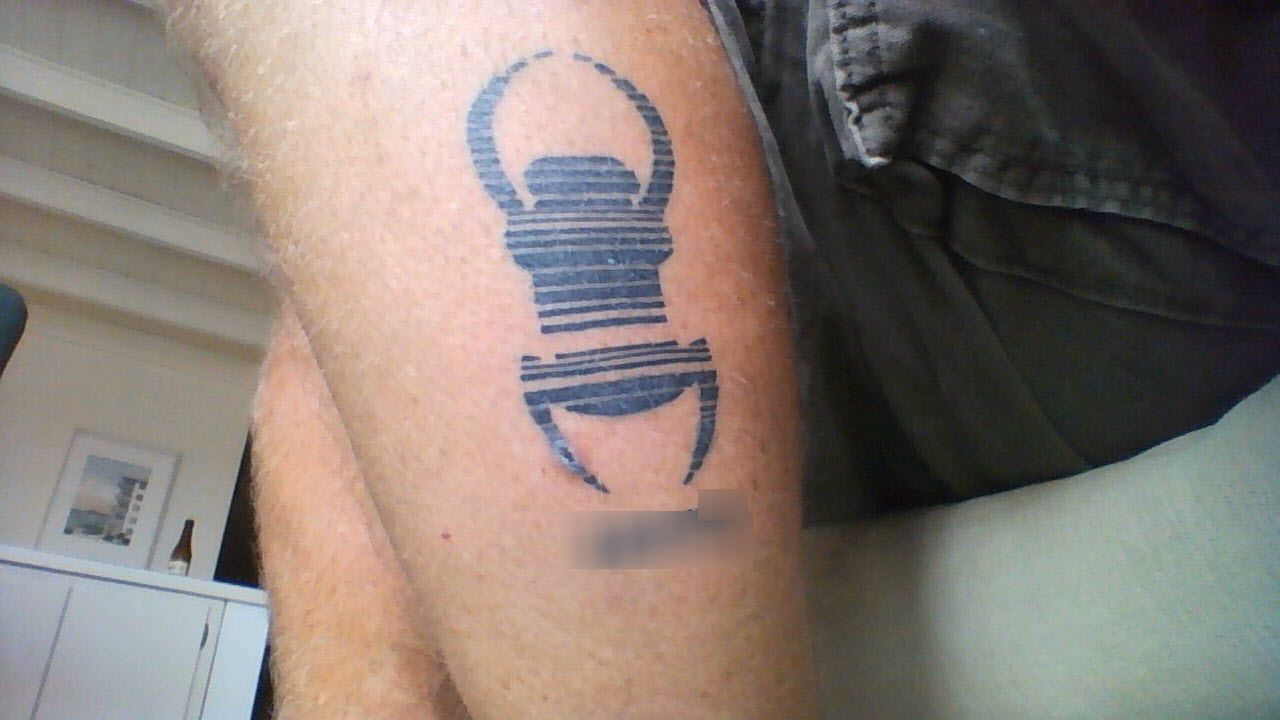 Mulling over the idea of getting a trackable tattoo? Here are a few things to consider beforehand:

– Tattoos are permanent so make sure you’re “all in.”

– It’s easy to get a tracking code for your tattoo. Purchase a set of Travel Bugs from Shop Geocaching or one of Geocaching.com’s Official Distributors. It is important that you do not send the Travel Bug into the geocaching world, as it will cause confusion.

– Use the unique tracking code from your Travel Bug as part of your design and have a trusted tattoo artist work their magic.

-You can receive a custom trackable icon for your tattoo. Send an email to bizdev@groundspeak.com and include a photo of the tattoo that clearly shows the tracking number. The icons are typically updated within a week of receiving your email. 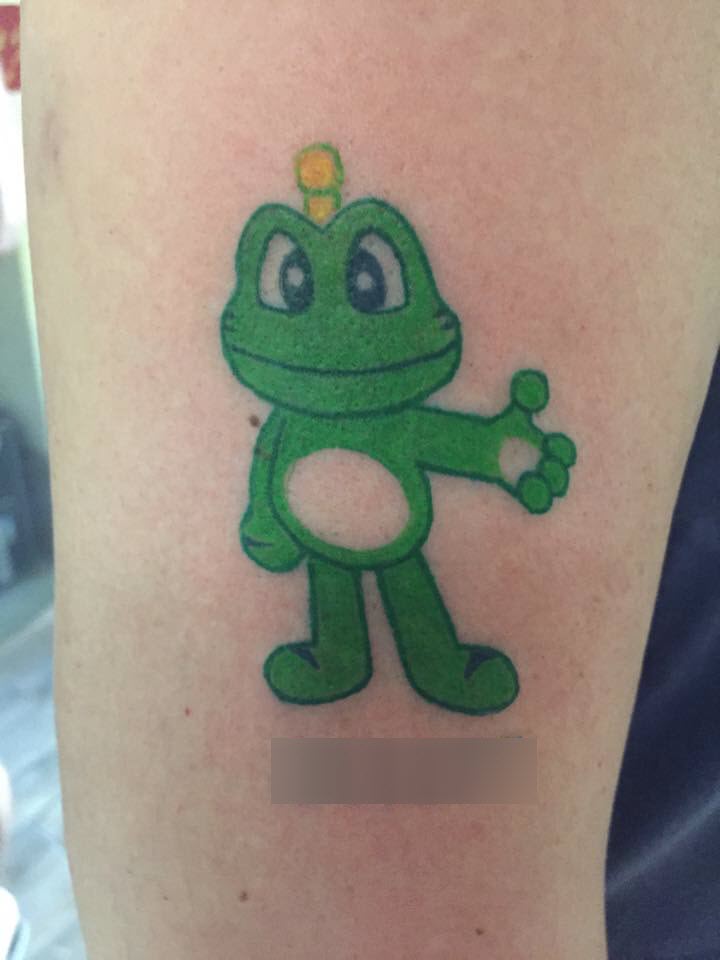 If you were to get a trackable tattoo, what would the design look like?