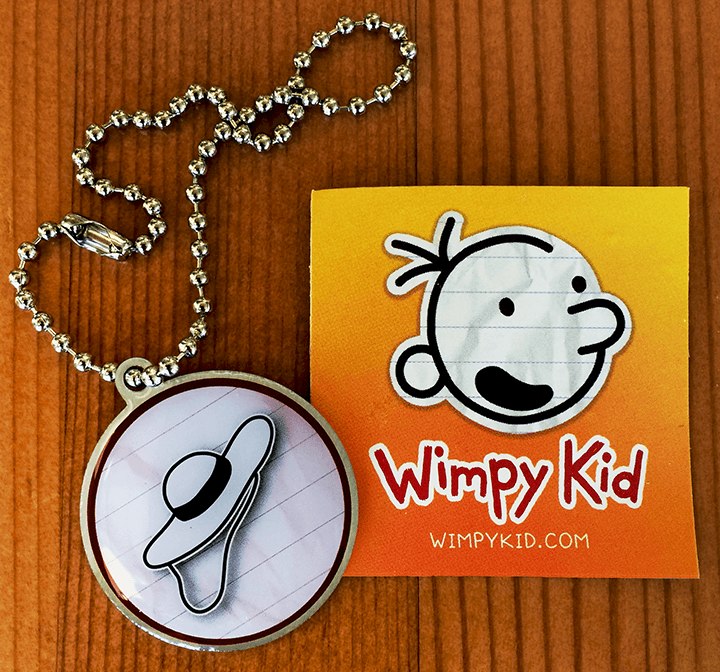 Geocaching partnered with Diary of a Wimpy Kid author Jeff Kinney to create a fun set of Diary of a Wimpy Kid: The Long Haul trackable tags to celebrate the book’s release last year. What you may not know is that the Wimpy Kid trackables came about because Jeff Kinney is a geocacher. He enjoys taking his kids out on geocaching adventures. We are thrilled that he wanted to share one of his geocaching experiences with us.

If you are following his series, you will be excited to learn that the next book, Diary of a Wimpy Kid: Old School, will be released on November 3, 2015. This book is particularly exciting because it will go on sale on the same day in 90 countries around the world, which has never been done by any book before!

Kinney shared one of his geocaching experiences with us, in his own words. 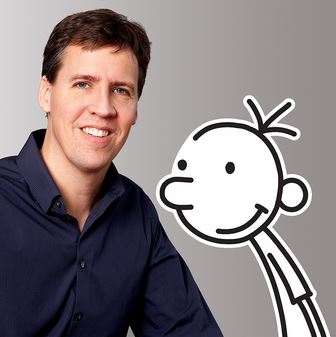 Geocacher and author, Jeff Kinney poses with Greg Heffley from his Diary of a Wimpy Kid series.

When I first learned about geocaching a few years back, I was thoroughly confused. People have stored little treasures in hiding places all around me? It seemed like an odd pastime to me. But mysterious and exciting at the same time.

I was looking for something fun (and cheap) to do with my two sons. And so I downloaded the Geocaching app. I was ready to head off into the wilderness some miles away, armed with a walking stick and an iPhone, braving ticks and scrambling over felled trees. But as a swarm of blue dots filled the map on my screen, I was surprised (alarmed?) to find that there was a hidden treasure not 200 yards from the back of my house.

Now this was exciting. I made sure my kids had adequate footwear and we headed out, stepping from the verdant grass of our backyard into actual raw nature. There was some scrambling and some hopping over creeks formed by snow melt runoff. There was some negotiating of brambles. There may have even been some burs. I’ll admit, I’m not exactly the outdoor type, so the thrill of forging my way through the wild… with two of my progeny in tow… had the feeling of real danger.

Eventually, we reached a clearing where power lines cut through the woods (OK, so maybe it wasn’t raw nature). By now, we were getting close. The pulsing blue dot was nearby, but where could the hiding spot be? These were early days of GPS pinpointing, and the dot hopped madly around the screen. It seemed that our quarry was on the move, taunting us.

I was waiting for the dot to stop. Then we’d creep up on it, look down, and find the treasure at our feet.

My kids must’ve detected the confusion on my face. This was a strange ordeal for them to begin with, so the sight of me spinning in place and shaking my iPhone violently didn’t give them a feeling of confidence.

But then I realized I needed to start thinking like the first person who had decided that this was the place to hide a cache. I gave up on the teleporting dot on my phone and started using my eyes.

My eyes fell to a fallen tree. It was all starting to come together. But where was the cache? Under the tree? Oh no! Did someone place a cache in this spot and a tree fell on it? This was going to be very hard to explain to my sons.

By then, my eldest son had climbed over the tree to investigate it from a different angle. And that’s when he found it. A plastic box, hidden in a hole in the log.

A real eureka moment. Inside the box was a giant pencil. A decent treasure for the effort put in. We added our names to the log, proud members of a long list of explorers who had come to the same spot, but from different starting places.

Neither of my kids saw me palm a baseball I had brought from home and slip it into the box before putting it back in the fallen tree. I didn’t need the tears.

A good bite-sized adventure and one I’ve repeated in locales further from home.

I never did teach them how to throw a baseball.