Meet Me at the Mega-Event in Berlin, Bring an Extra Coat 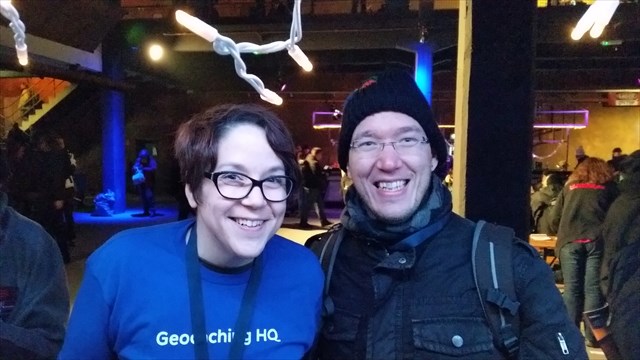 Amy (left) with a geocacher at the Berlin Mega-Event

Berlin in November is cold. Very cold. However, my trip last month to Germany for Mega-Berlin was more heart warming than I could have ever imagined.

The weekend full of events began Friday night with a Meet & Greet (GC4YYYX). The venue for the weekend’s activities was a lost place named Motowerk, a former factory of breakthrough electrical engines and elevators that opened in 1914. During world War II, the British government became aware of the factory and, in a raid on Berlin, dropped 24 bombs on the company grounds. Miraculously, the production hall and all of the company’s employees were unharmed.

After the war, the building was turned over to the Russians and used as a publicly owned business manufacturing condensers in the GDR. After the German reunification the factory became a location for events and, ultimately, the setting for Berlin’s largest Mega-Event to date, Mega-Berlin.

The Meet & Greet event had 1500 geocachers in attendance who enjoyed exchanging geocaching stories in between sets from the Polkaholix, a German, polk/punk band.

After a fun filled night, I returned to Motowerk bright and early the following day for the big event (GC4YYYY). The event hall was busy with geocachers, vendors, and activities around every corner. After checking out all of the vendors and walking through the children paradise and seeing all of the creative and fun activities there were for the kids, I headed out to find some of the nearby geocaches with a few geocachers I had just met.

If I didn’t mention this before, it was cold (really cold) but that wasn’t going to stop us—there was a variety of geocaches in the area to be found.

Returning to the event, I stopped by the event map and realized that there were geocachers from all over the world in attendance. This was truly a global event.

The best part of the event for me was hearing the stories from geocachers and seeing how the Berlin geocaching community came together to produce this event.

The next morning I returned again to the event hall for the Secret Santa Breakfast (GC4YYYZ). I sat down for breakfast with a few Swedes that I met at the event, Team-Prince and Palmarna. We had a great breakfast discussing geocaching events and experiences. The organizers of the event had arranged a gift exchange for the event. You drop off a gift, get a ticket, and return later to pick up your gift. My gift was a stocking full of all kinds of geocaching goodies and some candy!

Overall, I had a great time in Berlin and met some fabulous people while I was at the event. I cannot thank the geocachers I came across and the Orga Team for all of the hospitality they showed me during my visit.

« Tell the Story of Your Geocaching Journey » Epic Winter Adventure Awaits! – Georgia on my mind (GCV3AH) – Geocache of the Week