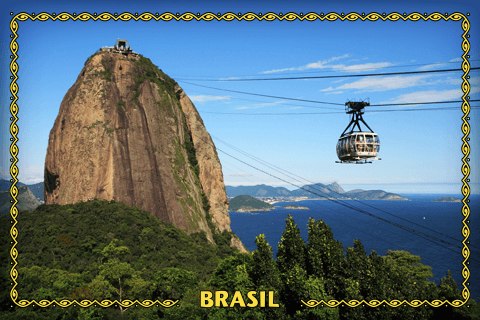 Brazil Geocaching Souvenir will be officially released on Monday, December 22, 2014

Yes folks, the time has come: Brazil is getting its very own Geocaching Country Souvenir! You’ve seen Croatia, Italy, Mexico, Belgium, and now you get to see Brazil!

Souvenirs are virtual pieces of art that are displayed on your Geocaching profile page when you find a geocache in certain locations. This holiday season we’re releasing six beauties to decorate your profile!

Take a virtual vacation and tour of some of Brazil’s best geocaches. After all, Brazil is known as the Land of Happiness, so let’s get happy, and let’s get going! 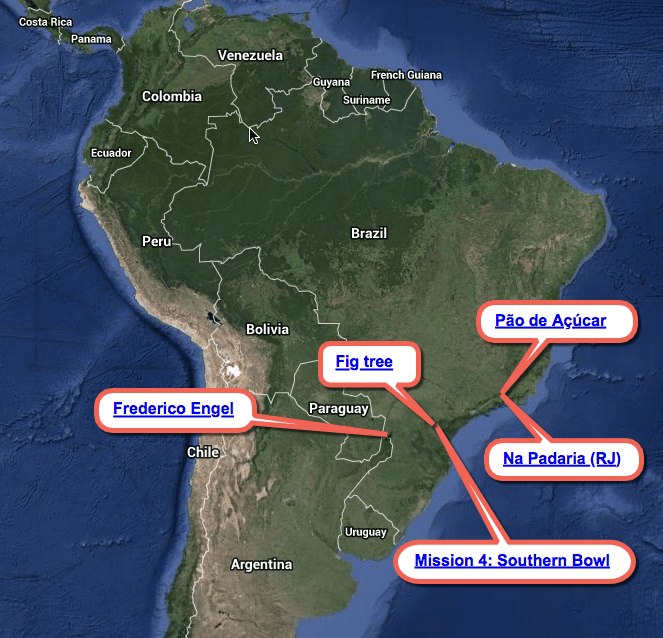 1. First on our list is  GC4KZEY Pão de Açúcar (Sugarloaf Mountain) EarthCache in Rio de Janeiro. This EarthCache is located in a public area atop the Urca and Sugarloaf hills. The cable car leaves a ground station located at the base of the Babilônia hill to the Urca hill and then to the Pão de Açúcar. And if that isn’t exciting enough, you could always reenact that famous action scene from the 1979 James Bond film Moonraker (…just kidding, that’s much too dangerous!)

2. Next stop on the tour is also in Rio at GCX2R1 Na Padaria (RJ). Some geocachers wonder if this geocache is really a T3, or  more of a T5. If you decide to see for yourself, make sure to hike with a friend, bring some water, and wear sturdy shoes. Geocachers have been known to see monkeys on these hills, submarines in the water, and unparalleled views of the world while on this trek. 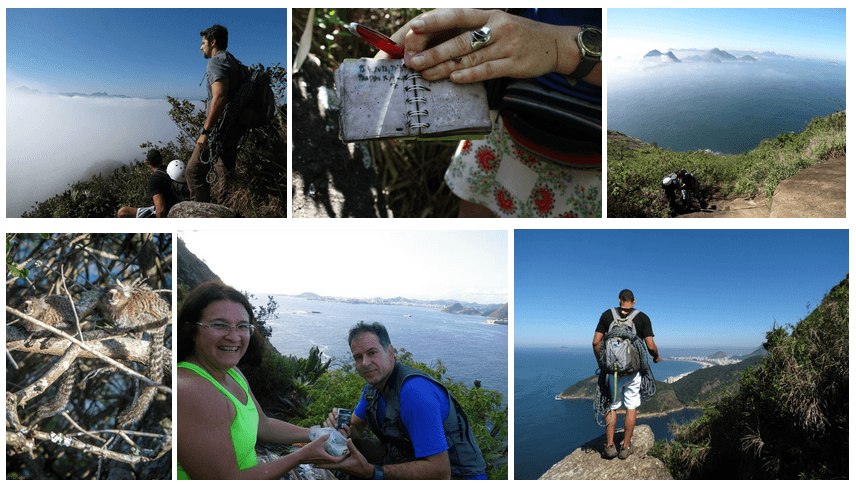 3. Time for a visit to the exotic rainforests of Brazil. GC3AN8N Fig tree Traditional Cache is placed in one of the most important remnants of the Atlantic Rain Forest in Southern Brazil. The forest extends along the Atlantic coast of Brazil from the Rio Grande in the north to the Rio Grande in the south, and as far inland as Paraguay and Argentina. Countless types of species and plants can only be found within this Eden on earth. 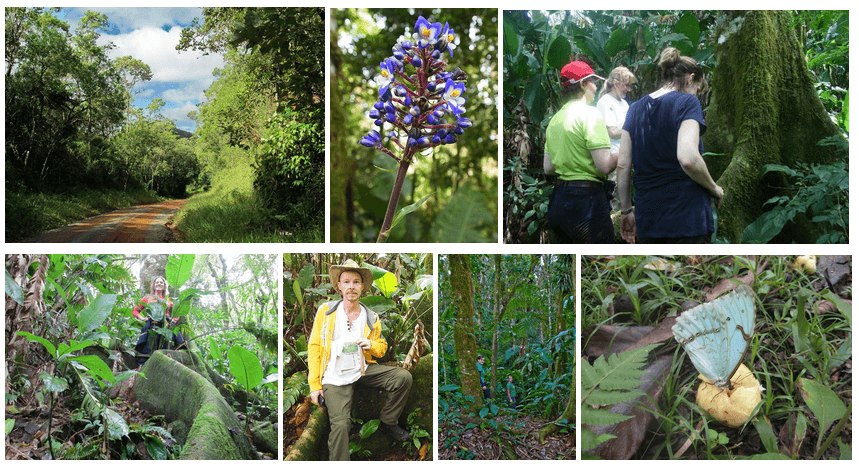 4. The Iguazu River forms the boundary between Argentina and Brazil. Legend has it that a deity planned to marry a beautiful woman named Naipí, who fled with her mortal lover Tarobá in a canoe. In a rage, the deity sliced the river, creating the waterfalls and condemning the lovers to an eternal fall.

Take a day to visit the falls and the traditional geocache GC3FMPF Frederico Engel. The namesake of this geocache was a man of German heritage who fought against the privatization of the falls. Find him and shake his hands and post your photo! 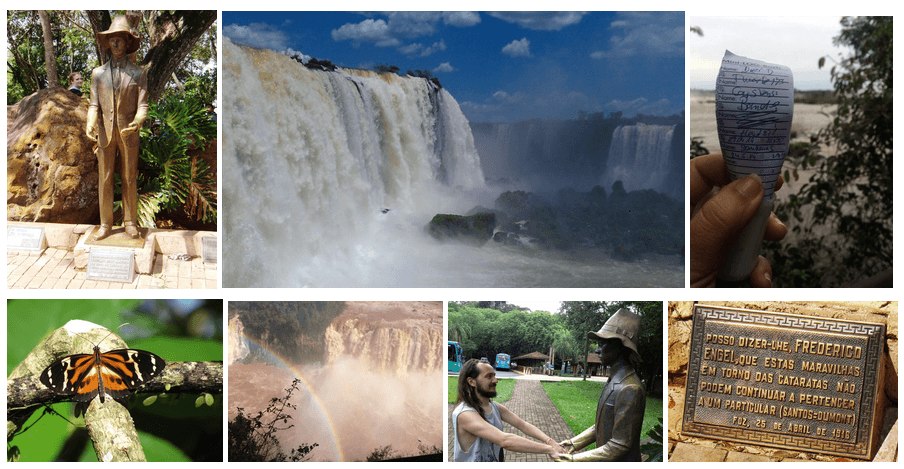 5. No list of Brazilian geocaches would be complete without the ultimate of all geocache types, the rarest of all icons that can still be claimed, and one of the most famous geocaches in the world, GCC67 Mission 4: Southern Bowl Project A.P.E. Cache!

In 2001, fourteen geocaches were placed in conjunction with 20th Century Fox to support the movie Planet of the Apes. Each geocache represented a fictional story in which scientists revealed an Alternative Primate Evolution (A.P.E.). These geocaches were made using specially marked ammo containers and contained an original prop from the movie. This one is the only A.P.E. geocache left in the world.

After 13 years in the jungle, this elusive geocache has acquired over 300 logged visits, and only 1 DNF. The tagline for this movie was, “Rule the planet”…and you just might if you obtain this cache. 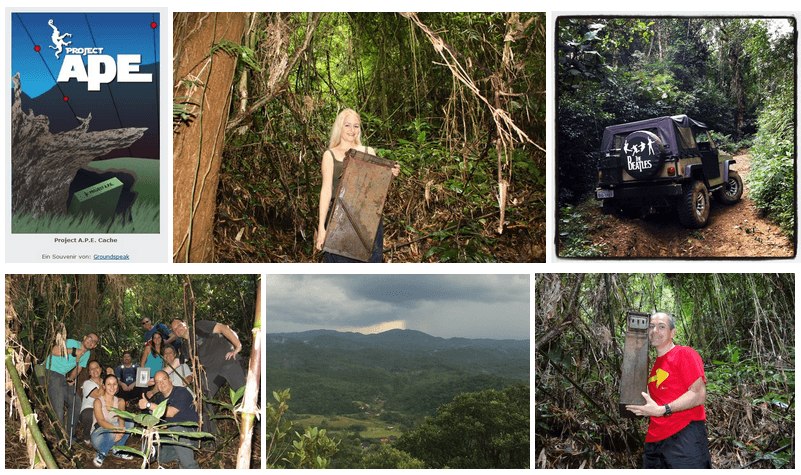 Ready to go bananas for Brazil? We will unveil the last of the six country Souvenirs on Thursday, December 18th, and then retroactively award them ALL on Monday, December 22, 2014 to anyone who’s ever geocached in these countries!

A list of of currently available Geocaching Souvenirs and even the ones you’ve already earned can be found on Geocaching.com.

Have you dreamed of finding, or actually found Brazil’s A.P.E Cache? Tell us about your dream journey!