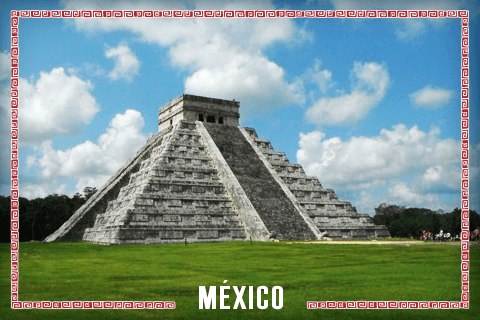 Mexico Geocaching Souvenir will be officially released on Monday, December 22, 2014

Officially known as the United Mexican States, did you know that Mexico:

…is the newest Geocaching Country Souvenir to be released this month? Yes it’s true! If the allure of white sandy beaches, ancient civilizations, rich culture, delicious food, and tequila wasn’t enough, now you can also earn a geocaching Souvenir for Mexico (this, in addition to Croatia, Italy, and three other new Souvenirs to be revealed soon). Souvenirs are virtual pieces of art that are displayed on your Geocaching profile page when you find a geocache in certain locations.

To wet your whiskers for this occasion, we’ve put together five must-see geocaches from the birthplace of the sun. Enjoy! 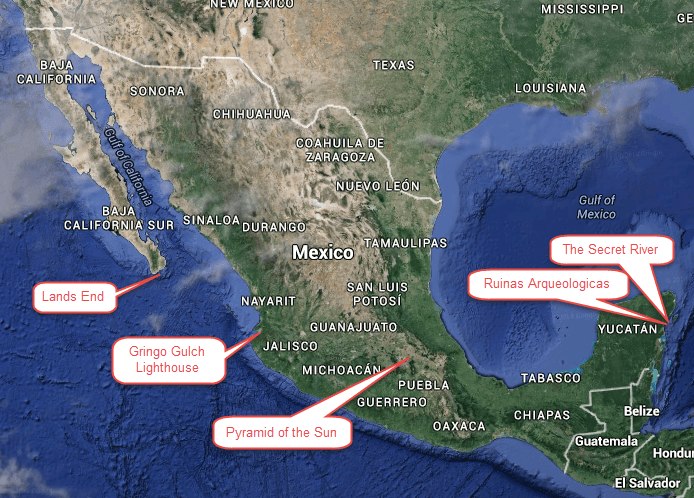 We begin our journey on the verrrrrrrrrrrrry southern tip of the Baja California Peninsula, El Arco de Cabo San Lucas, a.k.a. Lands End Arch. Make sure you travel by boat to find this geocache, otherwise you’ll have come a long way for a DNF. Besides, it’s really the ideal way to view the Cabo San Lucas rock formation. There are several small beaches located in this area, and according to the geocache page, “…an entire Love Life-Cycle can run it’s course at Lands End. Fall in Love at Lover’s Beach, conceive children in Pirates Cave, and ends at Divorce Beach.” 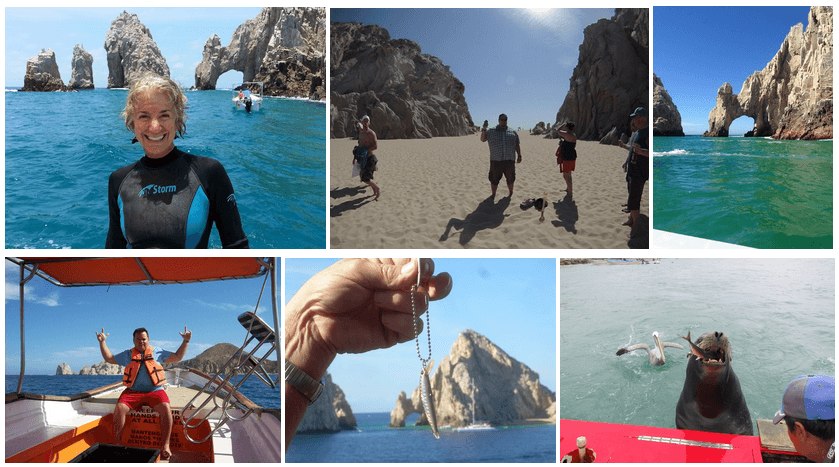 Now onto the mainland, and the Mexican beach resort city of Puerto Vallarta. There you will find an old lighthouse from the 1930’s that has been decommissioned and restored as a landmark. It is now a navigational beacon and popular tourist attraction. And if you make the trek and climb to the top of the spiral staircase, the geocache page promises you’ll see, “…one of the finest views of Puerto Vallarta’s traditional red-tiled roofs, not to mention the entire bay, from Yelapa at its southernmost end to Punta De Mita at the northern tip.”

And here’s a little known fact: Puerto Vallarta was catapulted into international consciousness in 1963 when The Night of the Iguana directed by John Huston, was filmed there. This film starred Richard Burton, and he brought his soon-to-be-wife Elizabeth Taylor to the location during filming. Their relationship had recently become public knowledge and they were hounded by the press. 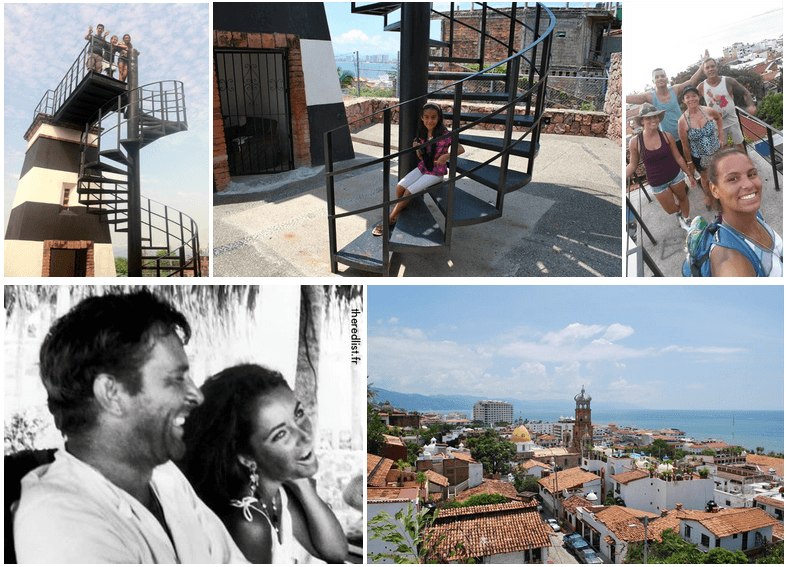 Our next stop on the tour is located about 40 kilometers (25 mi) northeast of Mexico’s capital city, Mexico City. There you will find the pre-Columbian Mesoamerican city known as Teotihuacan, The New World’s First Great City.

Enormous in size, at its zenith, Teotihuacan housed up to 200,000 residents and encompassed 12 square miles. The civilization which flourished at Teotihuacan was contemporary to that of ancient Rome. However, unlike that fallen city, Teo’s civilization lasted centuries beyond Rome’s demise. Remarkably, Teotihuacan seems to have sprung up out of nowhere, having no precedent in the ancient world. Archaeological evidence does indicate that the geographic area of Teotihuacan was inhabited by humans as early as 500 B.C. However, actual construction activities of the great city didn’t commence until 1 B.C. with the initial building phase of the site’s famous Pyramid of the Sun. 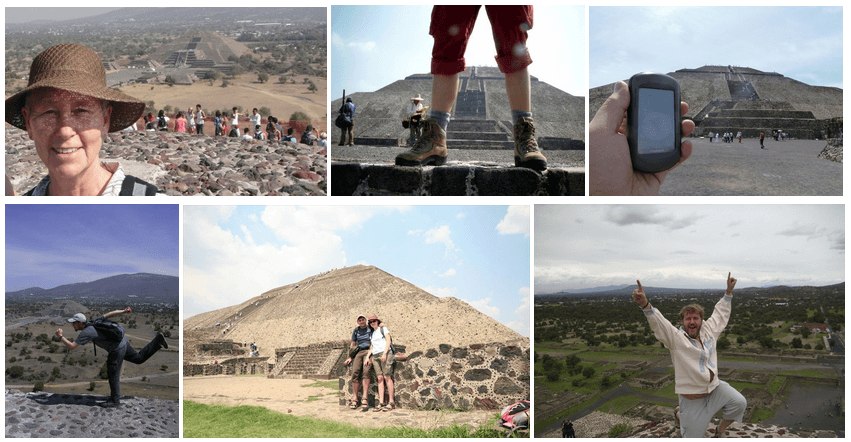 GC1DDE – Pyramid of the Sun

Do you like animals? We mean all types of animals – feathered, fuzzy, or scaled. If so, head on over to the Yucatan Peninsula and the surrounding grounds of the Ruinas Arqueologicas. Three Mayan Pyramids are located on this site with many native animals making this non-commercial piece of property their home as well. You’ll see plenty of birds, an occasional coatimundi, and quite a few iguanas.  And oh yeah – look out for the snakes. 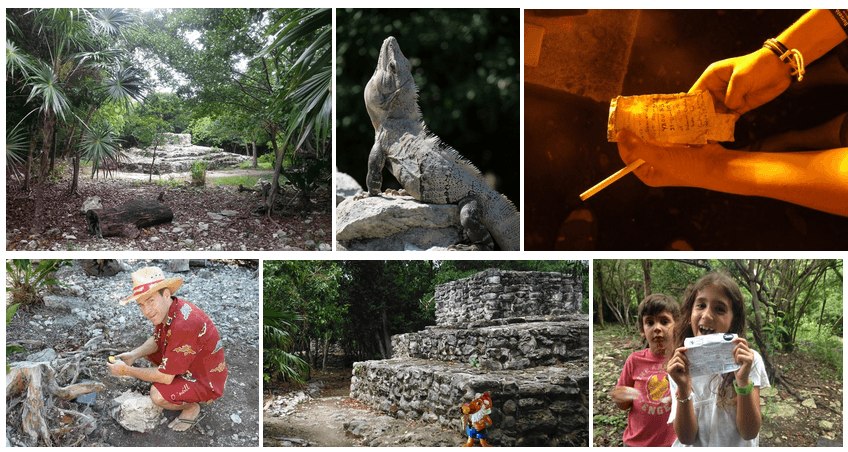 Our final destination is a D4/T4 full of stalactites, stalagmites, columns, and helictites. “What are those?” you may ask. Well, you’ll just have to visit this EarthCache to find out. The cache page describes this experience in alluring beauty:

Close your eyes. You hear nothing but silence and the faint sound of trickling water in the background. Imagine you are 80 feet below ground with your eyes open in the pitch black. You are one with Mother Earth. You are somewhere along an 800 meter stretch of a 14 kilometer underground river that originates in the interior of the peninsula and empties into the sea. The lights come back on. Look up and see thousands of jagged-edged stalactites pointing towards your head like the tips of poison Mayan arrows. It looks like you are either on another planet or on the set of a blockbuster Hollywood movie. 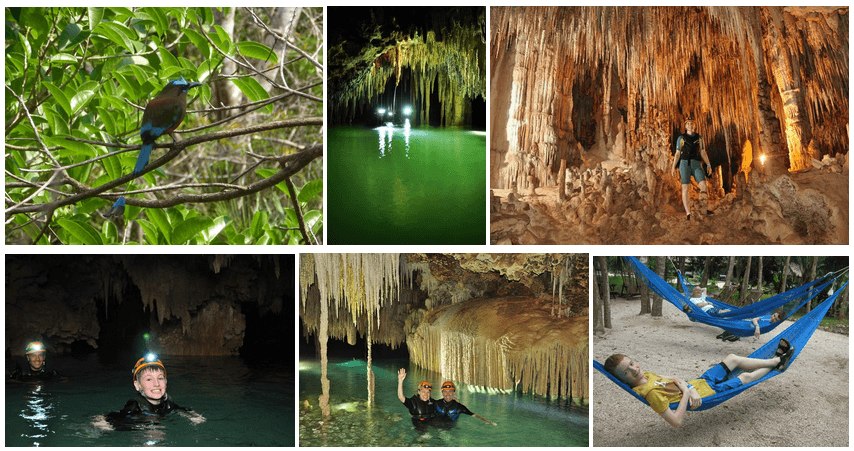 So there you have it, amigos. Five glorious reasons to travel to the wondrous land of Mexico and earn yourself yet another souvenir.

We will unveil two new Souvenirs each week until all SIX are officially released and awarded on Monday, December 22, 2014 to be proudly displayed on your profile. A list of of currently available Geocaching Souvenirs and even the ones you’ve already earned can be found on Geocaching.com.

Have you found a geocache in Mexico? How was your adventure?